FRÖJEL, A VENDEL AND VIKING PERIOD HARBOUR AND TRADING SITE

Just below Fröjel church in the western part of Gotland and close to the ancient coastline, one of the largest and most important trading places on Gotland during the Viking era is to be found. It was well-sheltered from hard winds by the island just beyond and the site was seething with activity over a period of 400 years. Merchants from different countries around the Baltic Sea came here and met local craftsmen and tradesmen.

A cluster of buildings surrounded the harbour with its jetties, and in the small houses the craftsmen produced their wares. Gotlandic men and women could pick and choose among a large number of products. There were imported goods such as wine and salt from southern Europe, precious metals from Arabia and amber from Poland and the Baltic states. In the craftsmen's shops one could buy typical Gotlandic jewellery and those who were wealthy enough could order a gold-plated brooch.The traces and remains from this trading place are both rich and varied. The archaeological excavations at the site are amongst the most extensive that have been carried out on a Viking harbour and trading place on Gotland. But there are still unanswered questions...

The Fröjel Discovery Programme began in 1998, and was a new type of culture-project, i.e. a project with a comprehensive view on the concept Culture Heritage. The project was intended to scientifically examine the Viking Age harbour at Fröjel, but also to mediate and bring to life the history of the Vikings on Gotland. The project was to a great extent a collaboration between local organisations of varying interests, businessmen and the world of science, with the main interest to develop the district as a place to visit.

The project intended to combine the archaeological research with regional development, so far that a scientific research project would be the base for an investment in the development and the knowledge about the Viking Age in the area, and to be an attraction in the district. The project aims were briefly to: 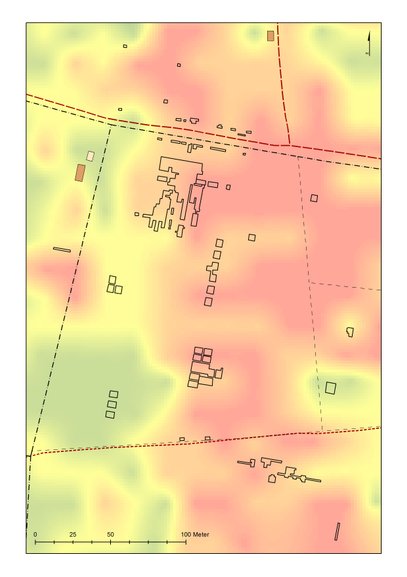 The image shows the trenches excavated at Fröjel on top of  phosphate mapping over the area.

In other words, the archaeological programme was an integrated part of an extension of the area's visiting-industry. The project was led by Viking Heritage, The Centre for Baltic Studies, in consultation with a project-group with representatives of Gotland University College, the County museum Gotlands Fornsal, Gotland's County Administrative Board and the Gotlandic Municipality, representatives of the home district association and the district development group at Fröjel. Leading and responsible for the project was associate professor Dan Carlsson.

Because the harbour at Fröjel was abandoned already during the 12th century, and the fact that the area is proportionately little exploited, the opportunity of studies about how a harbour of this character develoed is very good. In Visby, there was probably similar course of development, but because of the settlement's continuity, older remains have since been wiped out. Therefore, Fröjel is a perfect place to make detailed studies of the Viking Age harbour and trading and thereby obtaining more insight into the Gotlandic situation during the Viking Age through the Middle Ages.

New excavations can above all provide answers to the extent, direction and organisation of trading on Gotland, and in the Baltic Area generally speaking. For instance, we know very little about the people who were responsible for the trading, the general assumption is that they were active Gotlandic farmers (the regular distribution of silver treasures all over the island give proof of that assumption).

The material from the excavation gives a distinct hint of the extent of the easterly contacts to Gotland and a detailed study of the material from the harbour at Fröjel would in a way improve our knowledge about the relations between different areas around the Baltic Sea during the time in question.

Silver coins and weights have been found at Fröjel; the majority of the coins date from the 10th century. Together with imported objects as raw materials (amber, horn and rock crystal), signs of metal, bone and antler working the sigs of crafting and trade are abundant. There is an excavated silver smithy in the harbour place and probably more still lay unearthed. There are also waste products in the form of slag and molds for making ingots and decorative dress pieces.

The trade has probably had an eastern direction, something that's shown by the silver coins and finds like a resurrection egg from the Kiev area in todays Ukraine.

In the find materiasl from the site there is an abundance of needles and spindle whorls, showing everyday textile and sewing production. Finds such as glass beads, combs, bronze jewelry, belt buckles and decorative pieces are also found throughout the cultural layer of the harbour. The full find material from Fröjel consists of around 40,000 objects and still needs to be processed and analysed. 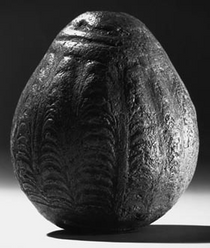 Resurrection egg found at Fröjel. The artefact is made of clay with an overlaying glaze.

Read more about the silver workshop here by expanding the document to the left.

Read more about metal working in Scandinavia here by expanding the document to the left.

Two gravefields are connected to the harbour and trading place. One is in the north part of the harbour and one in the south. The northern gravefield is dated to the Vendel period and covers an area of around 1200 square meters. The burials are in majority inhumations and include both male and female individuals. There are noted differences in the graves when some individuals are buried with a lot of grave goods and some with none; some are even buried with rocks on ther torso, as to "keep the person in the grave" or on their stomach facing down.

In total 150 burials have been excavated already within the harbour's borders. DNA analysis shows a tendency to the Russian and Baltic region within the male population while an isotope analysis showed an origin of Gotlandic individuals, both male and female. These conflicting results may indicate an origin of individuals from the eastern neighbours and the buried males at the site are the second generation, born and raised on Gotland.

The two gravefields follow each other chronologically where the northern represents the oldest phase of the harbour that then expanded to the south, creating the need for another gravefield. With the two Iron Age gravefields, the remnants of an early Christian vicarage and burial ground were discovered outside the east part of the harbour, adjacent to the church that still stands today. There is also probably an earlier church building on the grounds that predates the now standing church.

Together with the finds, the workshops and the gravefields, Fröjel also contains evidence of housing. The excavations have been carried out with a strategy of delimiting the site. This has resulted in alot of smaller search trenches together with larger areas of excavation. In all trenches there are remains of post holes, hearths, waste pits and other structural evidence. Houses can be recognised in the larger excavation surfaces together with wells for everyday water use and production.

The houses don't support a year-round settlement due to the lack of sufficient hearths for the Scandinavian winter. Aerial photographs over the site has also helped in establishing the generel settlement pattern that occurs within the site. Due to crop marks, a tendency to a north-south oriented settlement is visable. 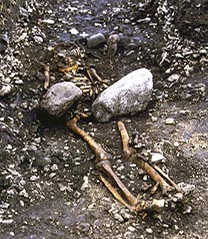 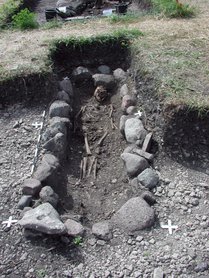 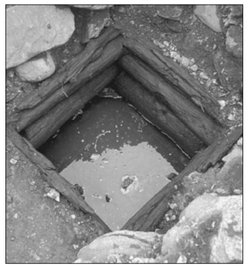 A Viking Age well from the 2001 excavation at Fröjel. Wells often represent an interesting research oppurtunity due to the accumulation of finds and sediment.

Fröjel consists of an extremly large material spread through official reports, books, articles and student work. The preliminary results are presented here in a very aggregated text. It is our job now to compile these results and further the research regarding Fröjel, the harbours and trade on Gotland during the Viking period.